You are here: Wiki » Lasershow Designer BEYOND Manual » Cue Groups

BEYOND 4.0 offers a new way to perform live shows. The idea is simple – you can Group Cues together to make it easier for you to find Cues of certain types or with certain properties eg. Beat Reactive Cues, Time Based Cues, or types eg. Liquid Skies, Strobing Cues, Fast Cues, Slow Cues etc. You can Group them by any feature or property you personally find useful to have grouped together. Then having created Groups of Cues, you can run one cue in a Group, much as you might run 1 Cue on a particular Page in Single Cue Mode. Groups are really a way of subdiving a Page into distinct areas of Cues with similar properties or features. It's as simple as that. But such a simple idea has multiple consequences that create a bigger picture.

eg. In Beyond, if using a Grid of 10×10 there are 100 possible Cues to choose from. However, if you Group the Cues together in 3 Groups, then you can only use 3 at any one time, as you can only run 1 Cue from any Group. At 1st glance, this looks very limiting, however, there's a very good reason - anymore and the lasers' scanners likely wouldn't be able to cope. So what the restriction gives is speed. What the Group gives is simplicity. What we have learnt over the years is that flexibility brings complexity, and it is hard to operate a complex system. It is hard to keep track of multiple things interacting together and foresee what will happen. Hence why it's better to have fewer Cues available to run at the same time and have more predictability about the outcome, than have too many able to run at once and have the system slowed either by the Cues running or the unforseen outcome from running so many Cues along with other features such as FX.

In 2004 Pangolin released LivePRO. LivePRO has 4 tracks. The Track is also a Cue Player. LivePRO has a Grid with Images and Effects. When you want to start a Cue, you need to activate Tracks that will play this Cue. It requires several clicks, or you need to assign a Cue to exact tracks in the Cues' properties. It means – you need to know the assignment of Cues, or need to select/activate tracks before the Cue starts.

In 2008 Pangolin released QuickShow. QuickShow is based on a “trackless track” concept. There are no tracks as in LivePRO, so no need to select a Track. You click on a Cue and the software starts playback. This made the system simpler. It's easy to start with no limitation on the number of playing Cues. However, this advantage has a consequence. It is so easy to start a Cue, we need some logic on how to restrict numbers / stop Cues, otherwise, we will overload the Output. QuickShow introduced several modes: One Cue, One Per, Multi-Cue. Each mode has a set of “Limiters” located in the Dynamics Tab. These limit the maximum number of Cues per Grid, maximum per Zone, maximum per type, and so on. The downside - is there are multiple rules, so it's not always easy to tell which Cue will stop when you click next one.

In 2014, BEYOND re-used the mode found in LivePRO with ProTracks. ProTracks are good for Scripting. You can easily address a ProTrack by it's Identifier, and control it externally. One of the typical applications of this model is External DMX control of BEYOND. Each Track might be considered as Fixture, and you can define a Script for it's control. Great flexibility, but flexibility can also lead to problems. The timing for the Scripting, with the possibility of desynchronization because of multiple Input sources. Operators often use DMX together with MIDI, keyboards, and so on.

In 2016 BEYOND introduced the “DMX Server” model. Here, each Projection Zone has an embedded ProTrack with 3 options for it's DMX mapping. With some level of abstraction, it reminds us of the “One Cue Per” mode of QS, but based on the LivePRO base element of a Track (Cue Player).

In 2017, BEYOND and QS are now getting one more model – Cue Groups.

You can start one Cue in any one Group. As soon as you start a new Cue, the currently playing Cue stops. There is an exception from this rule – Flash and FlashSolo modes. In Flash Mode, the life time of the Cue is defined by the release of the button. In the case of Toggle and Restart Modes, it needs an extra click to stop the Cue.

Cues are grouped by default in a Grid Style format. So, you can Group by dividing the Page up by a number of columns, or rows. Visual placement matters and this makes for a natural, visual grouping. In addition to it's placement, each Group has it's own Color. It is a direct visual indicator of which Group the Cue is assigned to.

There is new a type of Effect – an Effect that contains within itself, multiple Effects, and thus allows these to be assigned all at once as one Effect to any Projection Zone. You can start such an Effect from within a Group. ie. the Effect might be placed in a Grid Cue and then that Cue, added to a Group.

Let’s consider how it influences other parts of the BEYOND calculation path. It does not change Live Control at all. You still can use Cue Level, Master Level and Zone Level Live Control, Time Control and FX. Destination and Multi-Zone Effects work on the Master Level, but only for the Corresponding Group.

Grouping is simple, but there are several important details: 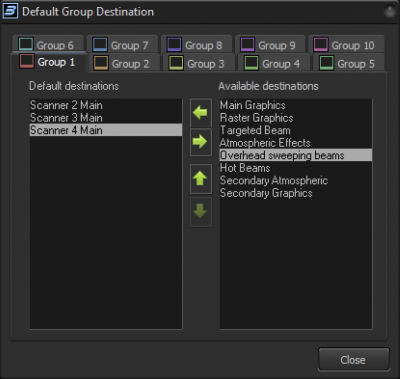 Each Group may have a default Destination. If the Destination is empty, then the software uses the Cue setting.

Here is the sequence of the Destination calculation.

Technically, the selection in the Preview Panel, Default Group Destinations, and Destination Cue, all work on the same level: - it defines the “parental” control for the Cues' Players. However, the role of parental control can be subverted by the Routing Effect Setting.