A Parametric Image is a collection of basic forms such as circle, line, art, spirals, etc. Whilst such images can be made through the use of the drawing tools in the Frame Editor, making them in a parametric style simplifies the task.

The “Parametric” Image has a brother, – the “Shape” Image. As time passed during development, the Shape Image received ever more new features that increased it in calculation time and complexity. The Shape Image was supposed to be the simplest of abstract generation starting points, and it was intended to encompass just a set of Base Shapes. A Parametric Image is not oriented around an Abstract. A Parametric is a basic figure, similar to a Frame, and it can be a speed oriented tool (if you do not want to spend time in the Frame Editor)

A Parametric image should have access to some of the features of a Shape Image, such as the Input Recorder, or Audio Based Forms, such as Audio Wave Display. Currently, we cannot remove such features from a Shape Image, and possibly, it makes no sense to duplicate them in a Parametric Image.

Currently, the Parametric Image Editor contains a set of 31 different Shapes. You can select these in the Shape List Box on the right hand side. 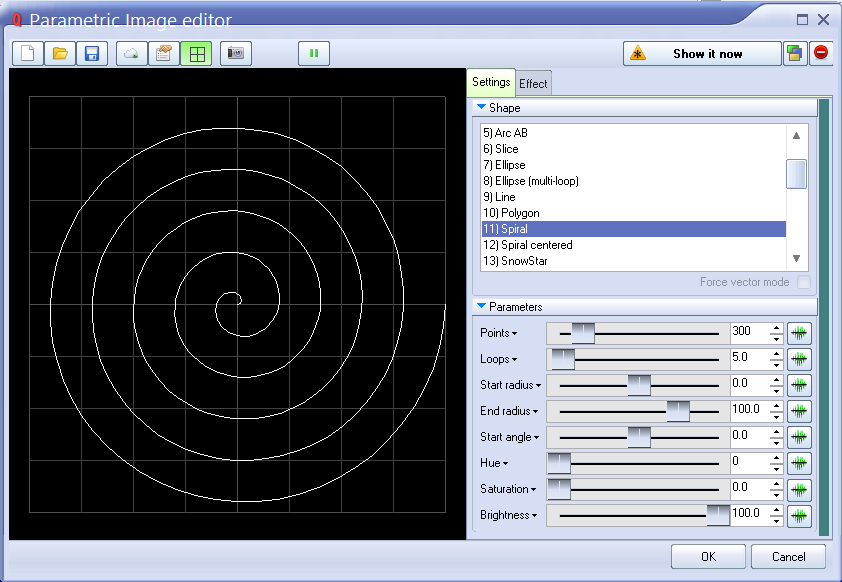 The Parameters Panel has groups of sliders which adjust the parameters of the Shape. Each Shape has it's own parameters. Pay attention to the green button at the right of the Parameter Sliders. This button calls the Input Settings Dialog and allows the injection of a dependence on a parameter from an external source such as Audio, DMX, MIDI, Channels and so on. It makes the Parametric Image reactive to the external source.

The Reactive nature of a Parametric Image opens the way for several areas of control such as external DMX control and Audio Reaction. A Parametric may react to an audio signal and be the a main element (together with Effects) in building Audio Visualization Images. In the content of DMX, a Parametric might be the rendering engine for values supplied by a DMX console.

Hint: A Parametric Image is higher priority than a Shape and so the calculation goes faster. If you can choose between Shape and Parametric – take the second. 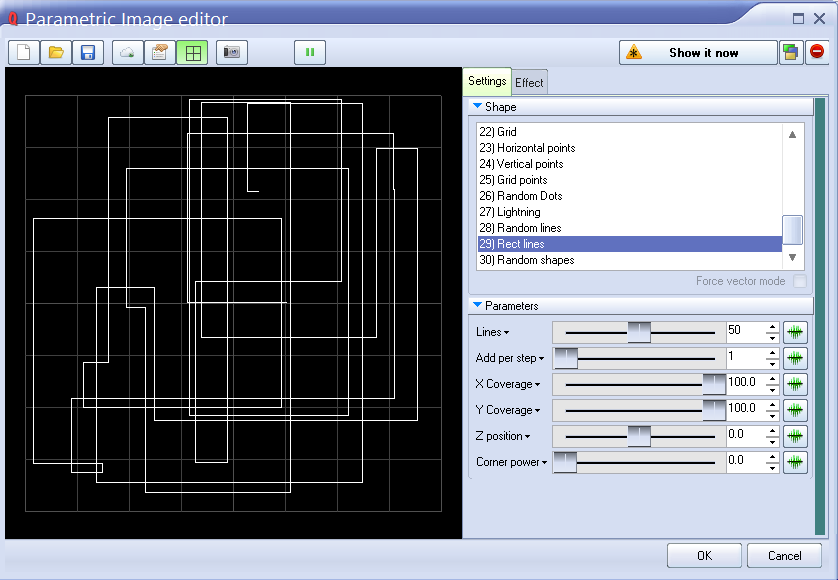 Some of the Parametric Shapes have a special design. In the complete opposite to standard figures, such shapes are “Content Generators”. Content generation might be based on a random data generator, or some other logic. An example of such content generators are – random points, random lines, etc. As time runs, we will add more and more. A special characteristic of such a model is it is not linear depending on time. In many cases, an Object placed in the timeline will produce the same Output based on it's time position. It is not the same with Special Shapes. Such shapes have their own “life”, and own rules. It is really a real-time process.