(only recommended for Advanced users)

QuickShow includes Pangolin's exclusive ILDA-Award-winning Projection Zones technology, which allows QuickShow to access up to 30 separate projection areas (zones) either from a single laser projector, or up to nine laser projectors. 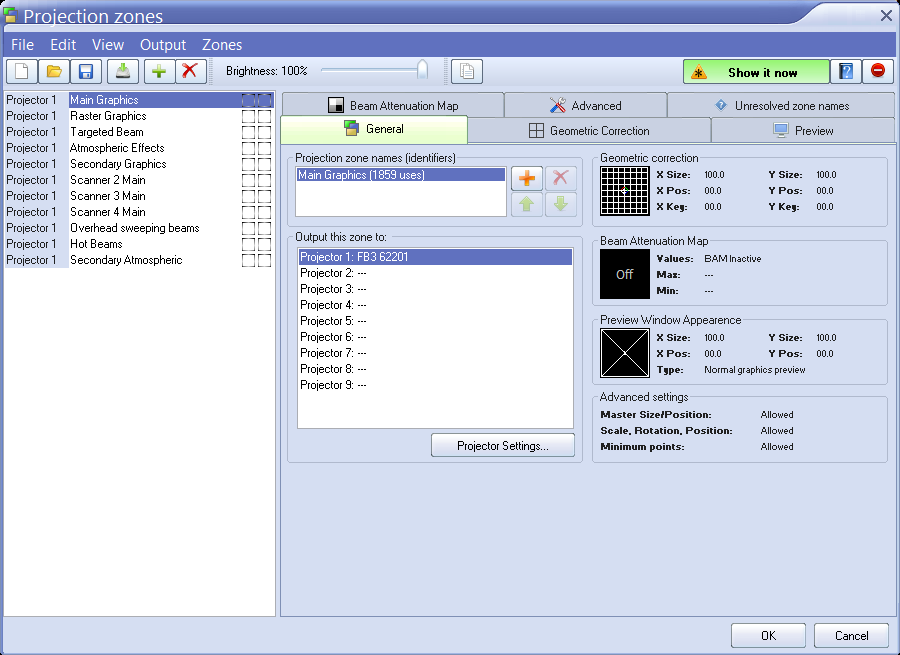 The area toward the top of the General tab allows you to specify a Projection Zone Name. Since there are 30 zones, you should give a descriptive name to each zone such as “Main Graphics” or “Scanner 2 Beam zone”.

The next section, labeled Output this zone to allows you to indicate the scanner (projector) that will be used for that zone, and also to adjust the parameters for that scanner. This is how you indicate which scanner will be used for each zone. Pressing the “Projector settings” button will display the Projector Settings window

Two columns of check-boxes to the right of the Projection Zone Name allow to output 2 types of test pattern, and it is possible to project a test pattern on multiple zones simultaneously in this mode. This allows you to adjust geometric correction settings on overlapping scanners. 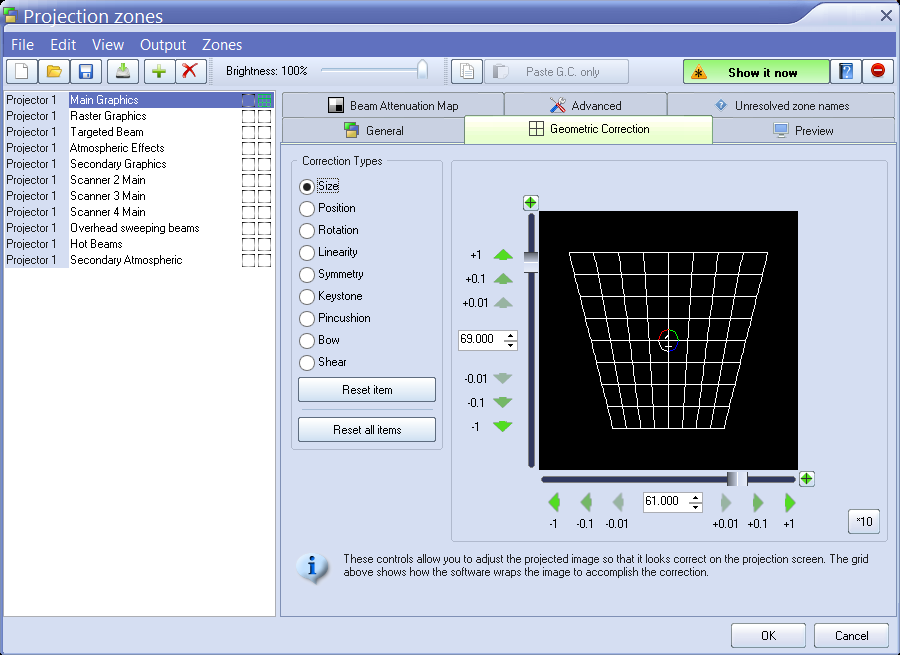 For each zone, the Preview image size and position can be adjusted. Moreover, you can specify whether the preview for that zone should be normal Laser Graphics, or Audience Scanning Beam effects.

You would mirror the output and position when you are sending the output of a single FB3(FB4) to multiple scanners at either side of a stage. When this is selected, the preview window automatically duplicates and mirrors the output even though there is only one signal source for both scanners. 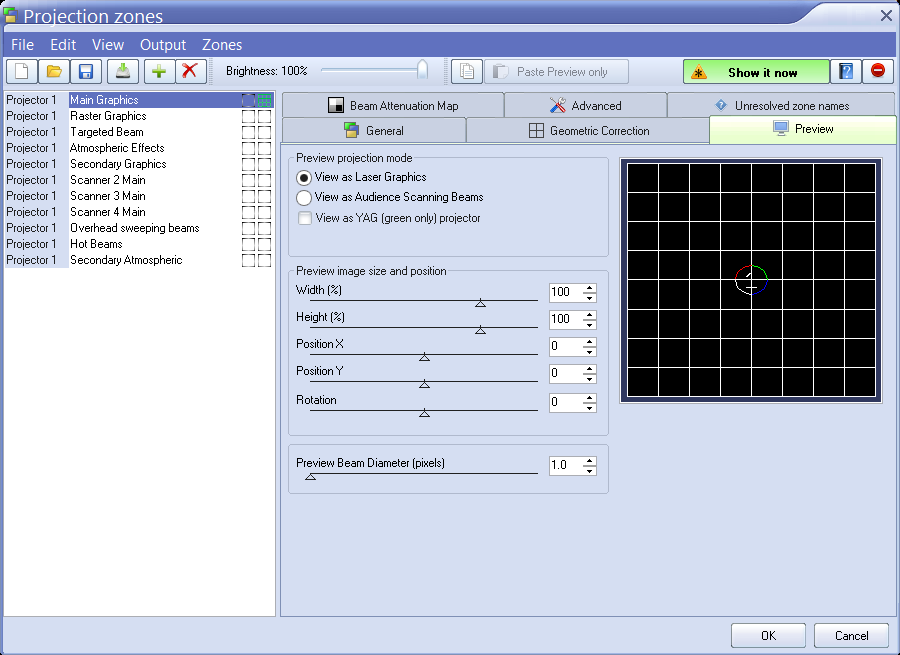 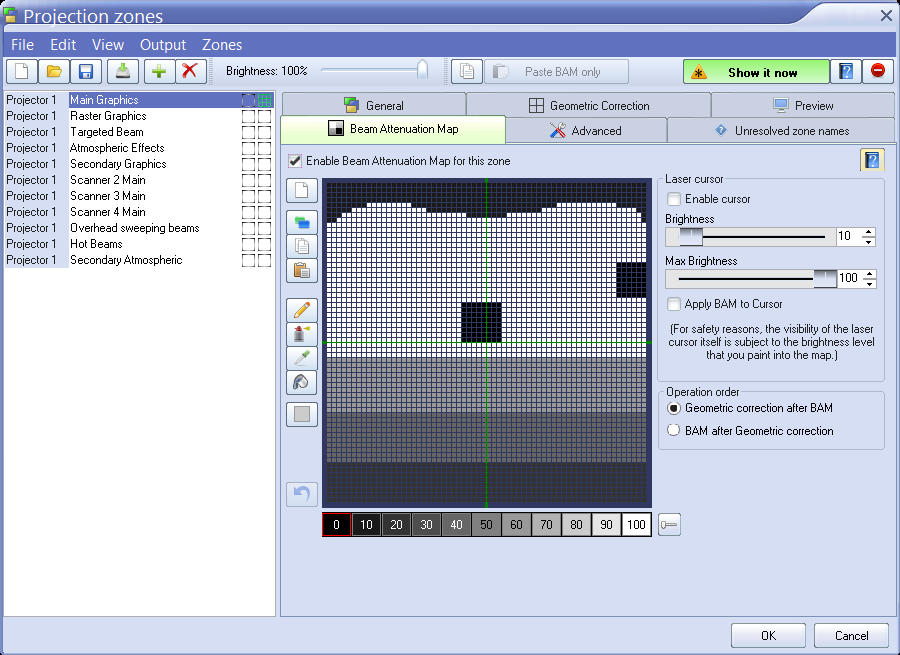 The next section shows the Advanced Scanning Parameters for the selected zone, and allows you to adjust them. These are advanced scanning parameters which are particularly well suited for zones used for targeted beam effects.

When the Prevent master size and master position check box is checked, it will make it so that the Size and Position controls in the Projector Settings window do not affect the output of this zone. 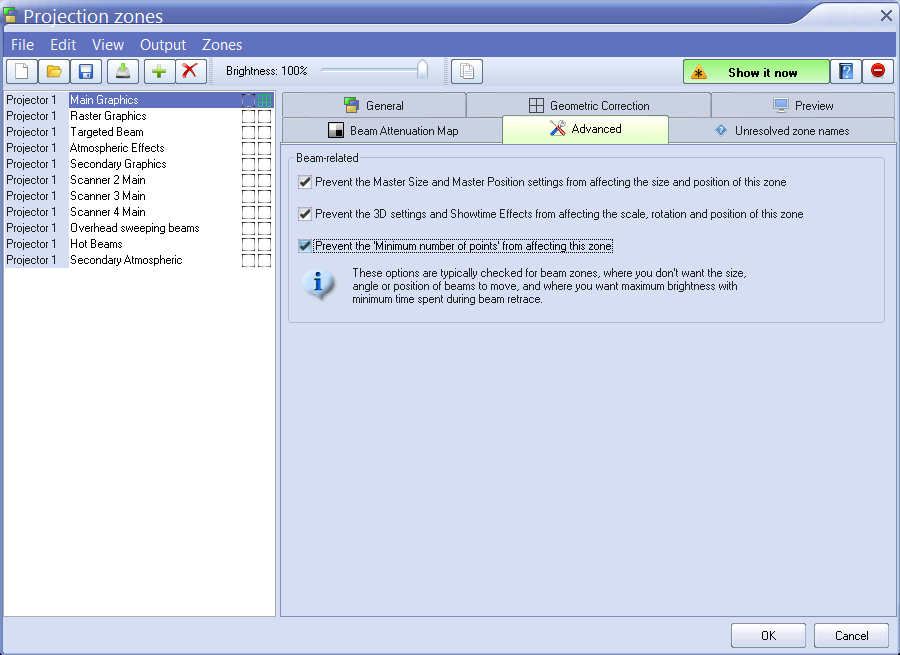 Projection Zones can be specified within QuickShow cues, so that when you trigger a cue, it will automatically be sent to one or more specific zones. See the help topic about Cue Properties for more information.

Projection Zones are not available in Beginner mode

The Projection Zones menu and window are only visible when you have the User Level set to Intermediate or Advanced mode. They do not appear if you are in Beginner mode.