You are here: The Pangolin Wiki » tools » Lasershow Converter Blender

Setting render default options for for all objects in a scene 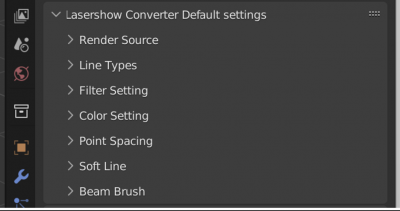 The parameter default settings for all scene have seven sections: 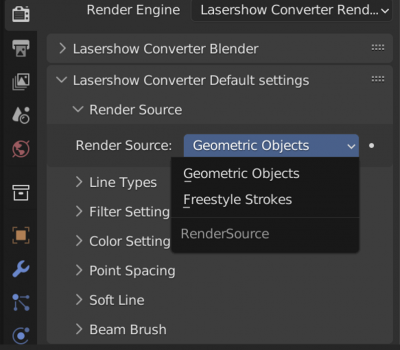 Render Source defines the type of scene objects that will be included in the rendering process: 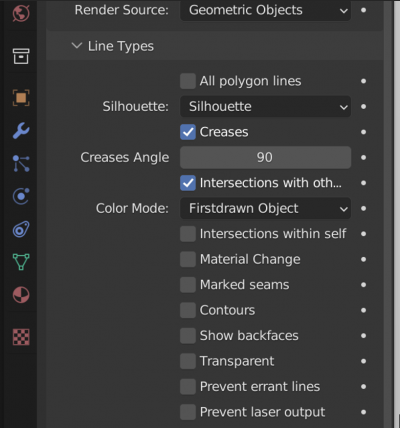 Lasershow Converter Blender includes several filters to aid in the creation of smooth paths for the laser to follow: 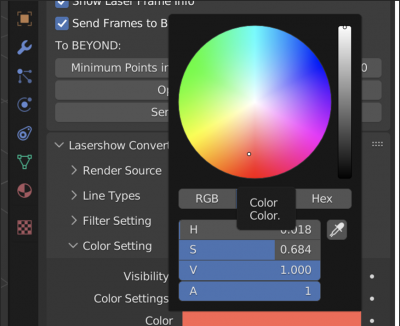 AutoBlank Points at round overlaps is the number of blanked points that will be automatically placed at the beginning and ending of rounded objects. These blanked points are not placed on top of each other, but instead are drawn the same way the object is in order to hide where the drawing started and ended.

If you set this value to 0, no closed contour optimization is used. Instead, the object is always drawn using AutoBlank Points at line endings and AutoAnchor Points.

AutoAnchorPoints at line beginning is the number of points that are placed at the beginning of a line.

AutoAnchorPoints at line ending is the number of points that are placed at the ending of a line.

AutoAnchorPoints at round overlaps is the number of extra points that are placed at the point of overlap of a circle or other rounded object. Normally this is set to zero so that you can't see where the beam starts or ends. But if you are using scanners that are not tuned perfectly, you may actually see a visible gap on circles. Increasing this number will hide the gap on poorly tuned scanners but this may actually cause a visible overlap on well-tuned scanners.

The Accelerate/Decelerate check box controls how the points are placed from the starting and ending of lines, and at corners. If this is checked, a special algorithm is used to accelerate and decelerate the beam from corner to corner, and from beginning to ending. When this is checked, it makes the object easier for scanners to scan, and it also reduces the number of corner and beginning and ending points needed. This can also keep objects looking good as they zoom out since it automatically controls the number of points along straight lines.

Corner detect ranges from 0 to 100 percent and controls the sensitivity to corners. At 0 percent, no corners are detected; this means the AutoAnchorPoints at various angles will be completely ignored. At 100 percent, any angular change within an object will be considered in light of the angle and AutoAnchorPoints will be placed for these particular angles.

AutoSpace Distance for straight lines controls the point density for visible lines that are completely straight with no curvature.

AutoSpace Curve detect controls the sensitivity to curves. The minimum setting of 0 means no curves are detected – the visible density for straight lines is always used. The maximum setting of 100, means Lasershow Converter Blender will place a high density on lines even if they are only slightly curved.

Note that with all of this flexibility, you have the power to create any kind of point placement that you desire. If you desire strictly even intensity over the entire image and “linear” point placement, simply turn curve detect off by setting this to 0. However, if you don’t mind some brightness variation in return for lower point counts in imagery, set this to a value of 20 or higherBeam path for this object

Beam path for this object

This controls the path that the laser beam follows, when drawing the selected object. It is important for animations to have a beam path that is consistent from frame to frame. If the beam path changes substantially from one frame to the next, this will produce noticeable disturbances that could look like jitter, or like missing pieces of the frame, or like flicker. In Lasershow Converter Blender, there are different rules that can be applied to keep the laser path optimized:

“Enable Soft Line” must be checked for any of the other settings on this panel to have affect on the rendered object.

AutoAnchor Soft Line “at line beginning” is the number of points over which fading will occur at the beginning of a line.

AutoAnchor Soft Line “at line ending” is the number of points over which fading will occur at the ending of a line.

AutoAnchor Soft Line “at round overlaps” is the number of points over which fading will occur at both the beginning and ending of a circle or other rounded object. Normally this is set to zero so that you can't see any line fading on circles.

AutoAnchor Soft Line “at line Angle”, is the number of points over which fading will occur at the ending of a line and also at the beginning of a line that both meet in a corner. For visual consistency, this should typically be set to the same number as used in Line Beginnings or Line Endings.

AutoAnchor Soft Line “Minimum Brightness“ Level specifies how faded the line endings will be. A value of 0.0 means that the corners and endings of the lines are completely black. 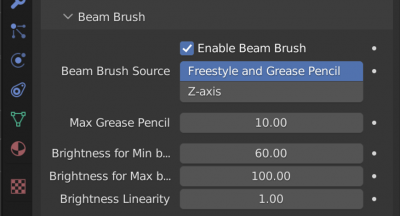 “Enable Beam Brush” must be checked for any of the other settings on this panel to have affect on the rendered object.

The Beam Brush can have two sources of parameters:

“Max Freestyle” – Limiting the maximum value of the line thickness of the object calculated by Blender, if the thickness parameter for the line point is greater than this value 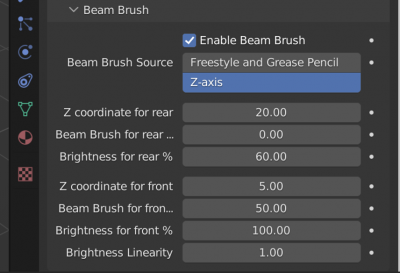 “Z coordinate of the rear” is the 3ds Max Z coordinate that will be mapped onto the far-away dynamic divergence, and also will be applied to the brightness of the object.

“Beam Brush rear” is the dynamic divergence value that will be used and effectively “mapped onto” the Z coordinate rear specified immediately above.

“Brightness rear” is the brightness value that will be used and effectively “mapped onto” the Z coordinate rear specified immediately above.

“Z coordinate of the front” is the 3ds Max Z coordinate that will be mapped onto the near dynamic divergence, and also will be applied to the brightness of the object.

“Beam Brush front” is the dynamic divergence value that will be used and effectively “mapped onto” the Z coordinate front specified immediately above.

“Brightness front” is the brightness value that will be used and effectively “mapped onto” the Z coordinate front specified immediately above.

(this will allow the selected object to override the default settings)

Setting render option for object is the same as setting for a layer.

If the settings for a layer are in effect, they affect all objects that belong to this layer. But, if you need to set the value for this object individually, then you need to set the checkbox for the required group of Lasershow Converter Object setting parameters in the Blender objects panel.

Freestyle mode is selected for this object, other objects can also be Freestyle or geometric objects

Grease Pencil objects each have a list of 2D layers for grouping and arranging strokes in a List view. Any stroke can only belong to a single 2D layer. There is always only one active layer in the list (the selected one). Custom settings can be set for this selected layer.

In Grease Pencil there are no special mask layers, any layer can act as a mask for other layers. The effect order of the mask in Lasershow Converter is always based on the location of the stroke in 3D space.

Setting the size of the output image and animation range Output Properties Blender Panel, we recommend the window size be set to 320-by-320 as shown below. 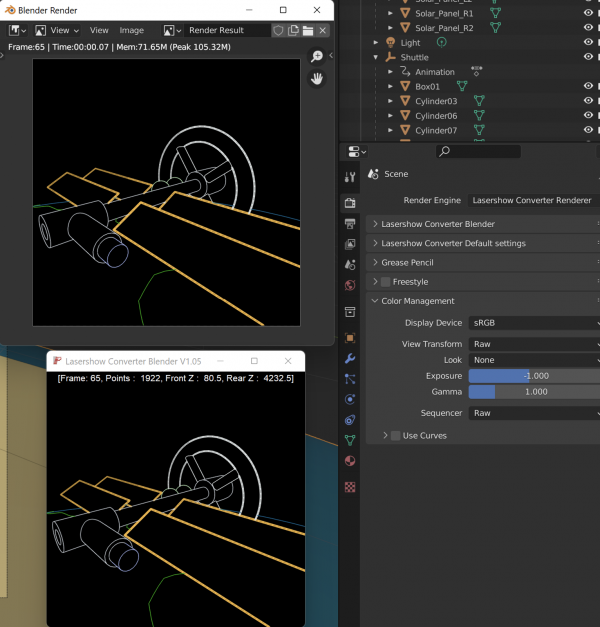 You need to change the default values to the following: