You are here: The Pangolin Wiki » Lasershow Designer BEYOND Manual » Network Connections

BEYOND can receive and execute PangoScript commands via the network. Normally, all scripts are contained inside of BEYOND. However, at times it may be helpful to control BEYOND externally from other BEYOND PC’s or from other software all together. The obvious solution for this, is to send commands to BEYOND via the network.

PangoScript is actually text. Over a network, commands must be received in text form, and as such, PangoScripts become the perfect tool for network communication.

The only syntax trick, is that BEYOND expects CF/LF at the end of command. Technically, at the communication level, BEYOND receives the incoming text stream and will accumulate that data in it’s buffer. As soon as the text CR/LF (13,10) appears, it will be sent for analysis by BEYOND. CR LF is a classic pair of characters that are used for the separation of strings in text, and 13,10 are decimal numbers.

Control of the network connections available in BEYOND can be accessed from the main menu - Settings-Network.

For a quick test you can use the telnet app. Try using the test command “hello” (do not forget about the 13,10). If all goes well and your system is setup correctly, then BEYOND will answer you back, saying “hello”.

Regarding feedback, there are three modes:

Hello - BEYOND will send back a “hello” response

Version - BEYOND returns the version in a text form

TCP/IP is not limited to the local network. You can control BEYOND externally, over internet as well. But, we must remember that laser can be dangerous, and it is a bad idea to leave it without direct human control, so we do not readily recommend this option, but if necessary, it can be done, and will work. To start the TCP/IP server click on the “Start TCP/IP Talk server” menu.

The “TCP Talk server” has a designed toolbar button to start/stop the connection. It also features two tabs… The “Connection” tab shows the log of network operations, and the “Recent commands” tab shows a list of recent commands received from the network. 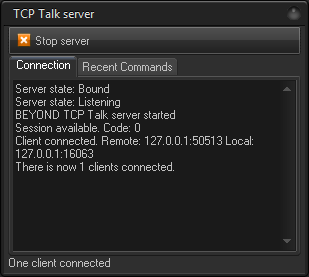 UDP Based - “BEYOND Talk”

BEYOND has has two sockets for UDP based control, and these are independent from each other.

The first socked is used to receive the commands - BEYOND receives the commands and executes them, acting like a Server. The execution itself is standard, just as with a TCP/IP based connection, or OSC.

The second socket is used for sending commands, and this is a foundation within the command oriented core. When you click on a cue, the UI generates an internal BEYOND command. Each internal command can be transformed into PangoScript. Since PangoScript is text, we can send via the network to other BEYOND systems, by means of a broadcast UDP connection.

This system is similar to the LivePRO network. Clicks in the UI generate commands, commands are in binary form, and go to other LivePRO systems in the network. We are using this same login in BEYOND. The only difference, is that we are using UDP instead of IPX, and text (script) based commands instead of binary data.

For a practical test of the UDP based connections, you need two computers with BEYOND connected to the same local network.

The “UDP” tab has settings for UDP based connections. Settings in the TCP Tab are equal to UDP. 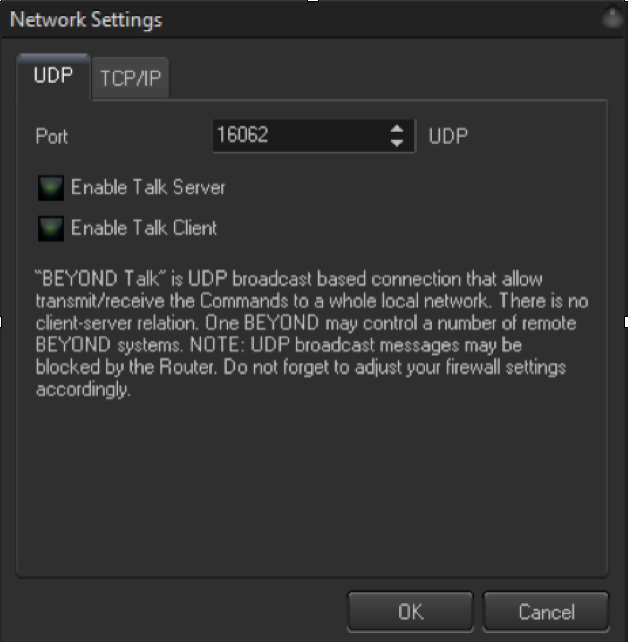 In the most cases RDM is easier. Some experts like Derek Garbos place a PC with BEYOND on stage and control BEYOND externally, over a Remote Desktop connection. He uses a fast network, and as such, it works well.

BEYOND’s Talk network has a limitation that comes from it’s use of PangoScript though. Not all the sliders generate commands. The Main sets do, but not everything. PangoScript covers the main areas, and it has 350 commands, but we will not say that you can do everything using PangoScript.