You are here: The Pangolin Wiki » Lasershow Designer BEYOND Manual » How to access the PangoScript Tab within BEYOND

BEYOND has many places that can use PangoScripts. The PangoScript tab was designed specifically as a container to house scripts that you have created. If you need to test or create a new script independent of Cues or MIDI devices, the Timeline or a Keyboard – use the PangoScript tab.

PangoScript can contain as many scripts as you need.

To add a new script, click on the NEW button. You can adjust the position of the script using the Up/Down buttons on the toolbar, or by using the keyboard – Ctrl UP and Ctrl DOWN moves the screen up or down accordingly.

The EDIT button calls up the script editor. A quick overview of the script text is placed at bottom of the tab for you to see.

The PangoScript – Task Manager button will call up a window that displays all active scripts in the system.

Stop All – This will stop all scripts in the PangoScript tab. Pay attention that the script has the command – StopOnBlackout included. Scripts with such options will stop when the Blackout button is clicked. This is very important to remember, if the given script will activate cues, because if it is not included, then you will not be able to stop it quickly (using the blackout button) as you would with VLJ or a normally triggered cue.

To start a script, click on the big blue PLAY buttons. For active scripts, the icon will change to a “stop sign”. A green line displays the execution position of the script. If during execution, an error occurs, then a Red X icon will appear, with information about the error.

The name of script is controlled by the command CodeName.

For visual indication, the script can also be identified by a color marker (shown by a small circle). The color of icon is controlled by the command in the CodeColorMarker.

The items Run, Stop, New, and Edit have obvious actions, so we will not dive too deeply into those.

Set Hotkeys – This allows you to assign a keyboard shortcut that will start/stop the script. Note that BEYOND also provides a Keyboard To PangoScript table.

NOTE: BEYOND automatically saves the script in the PangoScript tab. However we still recommend that you periodically backup you 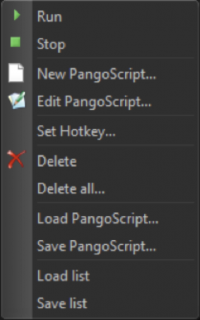