You are here: The Pangolin Wiki » Lasershow Designer BEYOND Manual » Projector Settings Menus

The BEYOND software controls a Laser projector through the use of Pangolin hardware such as a QM2000 or FlashBack controller. BEYOND uses a hardware serial number for the identification of a Laser Projector when BEYOND loads or saves the projector settings. Positioning of a projector’s hardware controller in the list is not important, because BEYOND uses the serial number from within the BEYOND configuration file. BEYOND loads and saves Projector settings automatically.

If you need to change the order of projectors in the list then use the “Laser and EmuLaser controllers” menu.

The Order of projectors is important for Projection Zone settings. Projection zones do not use the serial number for ordering, it uses the number of Projectors in the list. Such as Projector 1, Projector 2 and so on. Such a model allows quick and easily ordering of the connected hardware controllers. 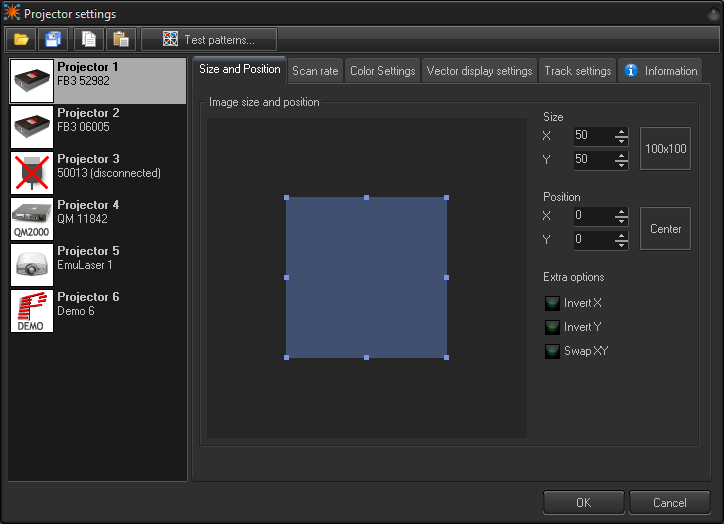 ize and Position are “global” settings of the Projector. “Global” means all Projection zones that go to this Projector will be influenced by this setting. The Projection Zone menu has Geometric correction settings which can appear to create some redundancy.

There are 3 simple additional settings: 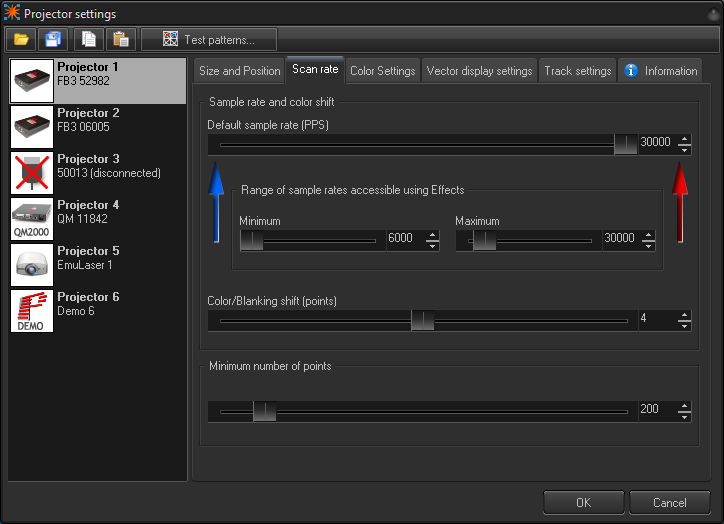 Color/Blanking shift controls the delay of Color signals relative to the XY values. This setting only has positive values.

Minimum number of points. This is a very important parameter. It may have effects for laser output power; it is important for CPU/USB/Network loads which can cause system overloading resulting in jittering, jerky laser output. Additionally there is a problem of “over power” for vector frames.

Wide Angle Compensation: Wide angle compensation is a new check box in your scan speed tab of projector settings which will automatically slow scan speeds down when projecting at large scan angles. This has the benefit of lowering the heat inside the scanners, correcting “bent” corners in projection, and extending the life of your scanners.

For using Wide Angle Compensation, you will set the scan speed at the rated scan speed of your scanners, and when you project at larger angles beyond 50% size, the compensation may come into play. It automatically determines parts of frames which may be difficult for the scanner and slows the scan speeds down ever so slightly to make the image correct at large sizes and remove heat from the scanner. The number of points this tool adds to frames is very minimal and often won’t be noticed so for most users its best to keep this enabled.

This tool has been tested on a wide variety of projectors and scanning systems including ultra-low cost scanners you may find in budget systems to high end Saturn scanners from Pangolin and ScannerMax like our Saturn 1 Series of scanners.

As an example situation, say you want a bottle of beer for a dinner. You get in your car, drive to the store, buy a bottle, and drive back. The next day, you have a party and you need a case of beer for dinner. Again, you get into your car, drive to the store, buy the case of beer, and drive back. The purpose of this example is to show, wether is it one bottle or a case, there is a specific amount of time being spent on the process of getting the beer. What is common to both situations? In both situations there was a time (calculation/resource) cost to get to the store and back where the number of beers purchased is irrelevant. The system load situation with computer data computation is similar to this example.

It is a common misconception for people to think making a frame with only a few frame points will help their control computer work more efficiently and therefore faster when actually the opposite is true. For example, if a frame is created that has only 10 points, and you have your projector scan rate set to 30K. 30K/10 = 3000 times per second that BEYOND will need to calculate this low point count frame, while also performing all its other related computations. If a frame has 100 points, then the computer will only need to calculate the frame 300 times. If the frame has 300 points then it will be calculated 100 times per second. There will be an obvious difference between calculating 3000 times and 100 times. High FPS values, as a rule, mean higher loads on a computer’s CPU because each calculation has a resource cost.

High FPS is not always possible to provide. For example, if you want 3000 FPS from a system, but the system is also trying to do some addition job (multiple resource intensive applications running at one time), or simply the system is not robust enough. What will occur is the Software will be unable to supply the calculated frames in the correct amount of time, and you will see problems with the laser output not being smooth and linear. The problem will cause poor visible output displayed from the laser projector. One more example for consideration, just using arbitrary numbers, you send 10 points, what approximately takes 100 bytes. The Ethernet packet will be at least 500 bytes. You are only sending 100 bytes, but the Ethernet communication layer is going to send 500, meaning you are only using 1/5 of your network’s speed, and 80% of that communication speed is lost. The main thing to keep in mind is that there are details related to buffering that should be considered when creating frames.

Minimum number of points in a frame for the FB3 hardware is 128 points; we recommend to set this value to 200 although sometimes it is helpful to have the value set to 500 or 700.

Now that we understand why low point count frames can be a problem (system overload, inability to deliver data on time, etc); this is why we default the minimum point count to 200. What occurs if we need to display a frame that has only 100 points? The Software adds an additional 100 blanked points to the frame. This means that for half of time it takes to draw the frame, the laser will be off, and half the energy will be emitted. What we be done about this? Decreasing the number of minimum points may cause unwanted consequences; a much better solution is to increase number of points within the laser content frame.

Vector frames and minimum point number. For vectors, BEYOND calculates the number of points dynamically, based on spacing. This allows BEYOND to keep the brightness of a line (vector) at a constant level when the line is calculated. If we have some minimum point number defined, then BEYOND will be able to compensate the for any brightness issues. 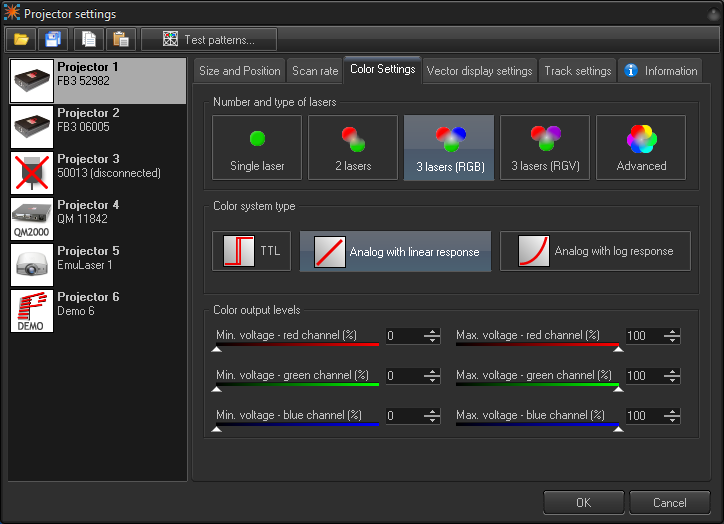 When configuring BEYOND, be sure to indicate the number of and type of lasers in your projector, along with the color modulation scheme (color system type) used with your projector. BEYOND offers a few standard modes for quick setup and an Advanced mode that provides more flexible options.

Number and type of lasers - choose the number of lasers in your projector. Advanced options can be used with up to 6 lasers.

Color system type - chose the modulation type that corresponds with the lasers within your projector.Advanced options provide a customizable diagram for each laser. 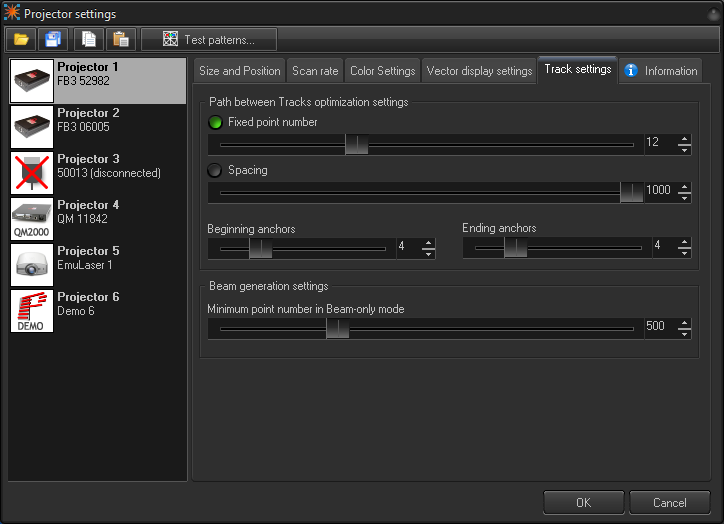 BEYOND generates special transitional (short) frames between the tracks/frames as well as between display updates. For example, if you display two cues, then BEYOND will inject a transitional path between them. The path is a blank line with a few anchor points in beginning and ending of the line.

Fixed point number - the path always has the same number of points distributed between the start and end points of the path.

Spacing - the number of points in the path is calculated dynamically according to the distance between the starting and ending points. If the distance is less than one space, BEYOND will not generate the transitional path.

Beam Generation Settings - minimum point number. BEYOND has a specially designed, power optimized system for beam generation used for Target Beam Sequences. The system is most effective when Target Beams is using static beams. BEYOND takes the minimum points as a basis and distributes them between the beams dynamically. The Number of points may be bigger than the minimum. 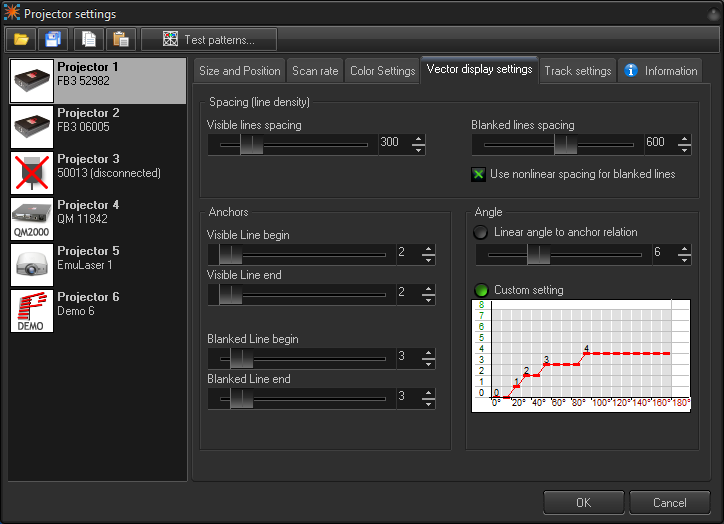 Visible lines spacing - the spacing (distance) between visible points. BEYOND measures spacing between two neighboring points and if the distance is 1.5 (or more) spaces, then BEYOND will add extra points in between. Number of points is a rounded value of (A-B)/Spacing.

Blanked lines spacing - the spacing (distance) between blanked points. As a rule, the spacing for blanked lines can be several times more than that of visible lines. Two big of spacing can be dangerous for your scanners because of peak voltage and consequential overheating issues caused by this.

As a rule, a frame is a sequence of multiple visible vectors/points and blank line(s) in between. The place where a blanked line becomes visible, or a visible line turns to a blanked line requires additional anchor points for vectors.

Linear angle to anchor relation - number of anchor points in a 180 degree turn. 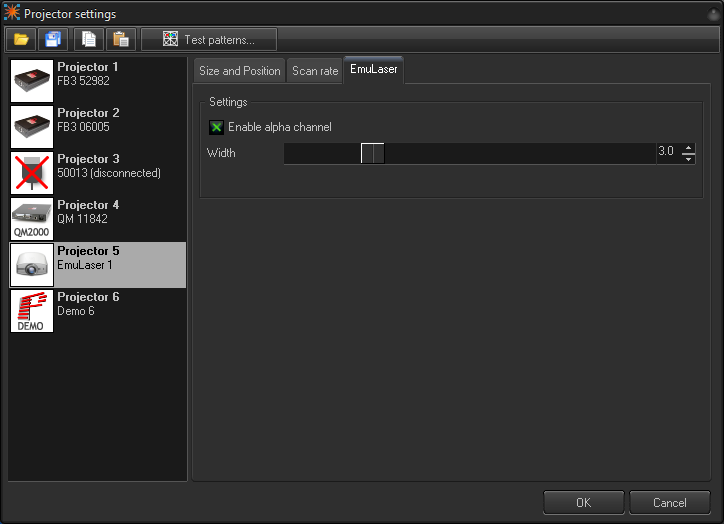