You are here: The Pangolin Wiki » Lasershow Designer BEYOND Manual » QuickDMX

The main features of the QuickTargets tool are shown and described in the picture below.

As shown, you simply add as many steps as you want in the sequence, moving the sliders at each step, indicate the step duration, and then either Show it now, or drag and drop the sequence to a cue for playback later.

Adding steps to create a sequence

Although the QuickDMX tool can be used to output a single channel or channels continually (thus forming a DMX “scene” and requiring only a single Step), typically the QuickDMX tool is used to make sequences. To create a sequence, you must first add as many steps as you want in the sequence. For example, if you want to have a four-step sequence, simply click on the + button until you see four steps.

Controlling the speed of the sequence

Stepping through the sequence manually

You can review the output of each step by simply clicking the left mouse button on the desired Step. For example, if you want to see what the output looks like at Step 2, simply click on the word Step 2. The step number is made bold in the list.

Saving the QuickDMX to a cue

You can save the QuickDMX sequence to a cue for permanent storage or for use later. Simply drag and drop the preview window (or the QuickDMX tab itself) to a cue.

Changing the name of DMX channels

You can give each channel a different name by clicking the right mouse button on the label below the slider, and entering a name. 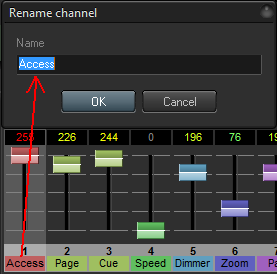 Changing the color and control type

You can change the color of each slider by right-clicking on the slider itself, and then choosing a color in the menu. If you have a DMX fixture that uses six channels, you can make the six sliders that control that fixture all the same color, thus helping you to identify which sliders correspond to the fixture.

You can also designate a channel as requiring stepped change or smooth change. For example, certain lighting fixtures have control channels which require absolute values to be presented, while other channels that control the pan, tilt, and brightness would desire a smooth change. This too can be specified. 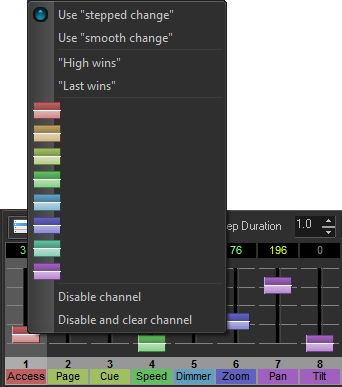 Changing how channels are viewed

You can view the DMX either as sliders (as shown above), or as a spreadsheet format, or as a waveform, showing how the channel values will change at each step.