FB4 contains a feature that many aren’t really aware of that was created for those who are intending to use their laser projector for audience scanning applications. 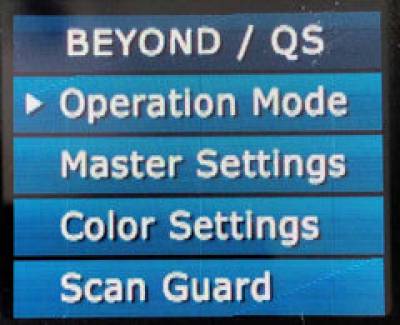 The feature is called “Scan Guard”, it’s designed to provide an additional method of safety so that static laser beams will be blanked as soon as laser output meets certain specific defined settings.

Though the function itself requires a bit of explanation to understand how it truly works, and how it benefits you as the user. In this article, you’ll learn what the “Scan Guard” is, how you can use it, along with more on laser safety.

The information found below was written by our friends over at LVR Optical. You can check out the article on their website by clicking here.

One of the less known features of the FB4 is its scan-fail safeguard feature called ‘Scanguard’. The features of Scanguard are accessible as an option from either the FB4 device directly, by navigating the menus on the FB4’s display, or through selecting the FB4’s settings, when connected to a computer system running the latest versions of Beyond or Quick Show. The sub-menus of this feature allow the user to configure a number of parameters that limit the exposure potential of scanning laser effects, which can, if correctly set up, reduce the likelihood of a laser effect creating an excess exposure.

How do I use the Scanguard feature? 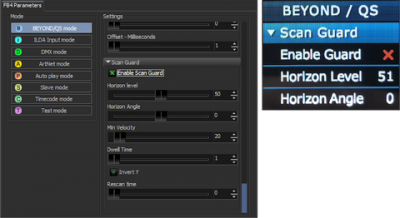 Scanguard will only work if the projector manufacturer has provided the necessary scanner feedback signals, and connected them internally to the FB4. If these have not been implemented, the Scanguard will not function; at best if you try to enable it, it may appear to switch the beam off occasionally. Kvant is one of the manufacturers that have confirmed to me that they have implemented the feedback signals necessary for Scanguard to operate.

Because configuring Scanguard is setting up a safety control, and it’s quite possible to put people’s eyesight at risk if things are not configured correctly. You should therefore have a good understanding of exposure levels and understand the significance of properties such as angular velocity, peak irradiance. If you are at all unsure that an exposure level is safe, don’t aim the laser effect at people. Learn how to set up the FB4 safeguard features on our Audience Scanning for Laser Show Designer’s Workshop.

If you have a laser projector capable of meeting the first requirement, and have a good understanding of setting up and checking scanning exposure properties, the following notes have been put together to help you understand Scanguard’s configuration parameters:

Three parameters are available to set the area over which you want the scan-fail safeguard to be effective. In many installations nowadays, the audience scanning effects are created using dedicated projectors for the effect, while the overhead effects are created using separate higher power projectors. It is however possible to use a single projector to create both audience scanning effects, and define an area overhead, where more hazardous slower moving and momentarily stationary beams are permitted. The parameters that control where these areas are defined are: 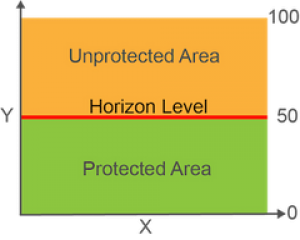 Specifies horizontal extent of the protected area within the scan field. The default position is 50%, which means that area below the vertical midpoint of the maximum scanning extent is protected by the scan-fail safeguard, and anything above the imaginary horizontal line can be projected without needed to be concerned about the beam velocity. The Horizon Level is usually set using a test frame and adjusted to operate a little distance above the audience to achieve a minimum 3m separation distance, as would be the case for any overhead laser effects. This allows effects, static beams, and finger beam fans etc., that could otherwise be hazardous, if projected into the audience, to be ignored by the scan-fail safeguard, and permitted to output into the area defined above the audience.

The Horizon Angle allows a Horizon Level to be rotated by up to 45 degrees in either direction, which could be useful if the laser projector is not level, being mounted on an angled truss for example.

This toggle switch simply inverts the behaviour of the scan-fail safeguard on the vertical Y-axis.

Effective protection from excess beam exposure depends upon the characteristics of the laser, its scanning system, and the environment, (e.g. minimum separation distance), that the laser projector is used. Two parameters allow customisation of how the scan-fail safeguard reacts to the scanner output.

The minimum velocity that the beam is permitted for output can be adjusted with this parameter. This parameter’s numbers intentionally do not have a specific unit attached to them such as radians per second, or metres per second, because such units would need to be calibrated against the scanner configuration. But the values can instead be used to set the threshold at which you require the beam to extinguish. i.e. when the beam travels too slowly. The threshold is based upon the combined velocity of both the X and Y movements, which still allows single-axis effects such as flat scans to be projected, (where one axis is, in effect, stationary). Starting with a setting of 0, which permits stationary beams, the minimum beam velocity that is permitted for output, increases as larger numbers are specified.

This parameter allows the user to specify the time in ms that the laser effect may output at the minimum velocity before shutting the output off.

This parameter is not actually related to any scanning output characteristics, but instead refers to the maximum amount of time the FB4 should rescan the network connection, in the case of dropped data on a temperamental network. The number relates to the number of ms (milli-seconds) to use.

A simple toggle switch that allows the FB4’s Scanguard feature to be switched on and off.