Although Lasershow Converter MAX's default1) settings give good results for most scenes, it is still handy to assign point placement settings on an object-by-object basis. Below you will find some suggested settings for various scenes.

Settings for cubes and rectangular objects

In the New York scene below, the arrows point to lines on the buildings that have a fairly shallow angle.

In addition, depending on the view of the camera, parts of the cube might become very small and might start looking more like curves than corners. Therefore it may be desirable to increase the Corner detect value as well.

Here are the suggested settings for this particular scene, to give a consistent appearance as the 3ds Max camera flies a path from far away to close up: 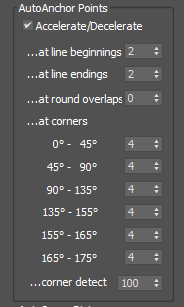 Setting for spheres and rounded objects

In 3ds Max, a sphere, like most objects, is made up of a mesh. The number of segments determines how faceted the sphere is. (You might not see the mesh, since 3ds Max's renderer can smooth the facets into a round sphere.) Here is a typical sphere:

When this is rendered with Lasershow Converter MAX, you will see the facet outlines:

Depending on your point spacing settings, the angles between the facet lines might look like corners. If you allow corners of wide angles to be detected by Lasershow Converter MAX, you will no longer get a nice round laser path. Instead, you will have a polygon with sharp corners. There are two ways to make a coarsely meshed object always produce a round outline.

One way is to set the Corner points at various angles to a value of 0. 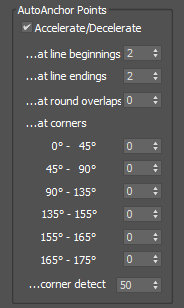 Another way is to simply reduce Corner detect to zero: 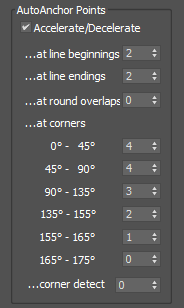 Although the corner detector will no longer put any extra corner points here, the curve detector will still place more points in this area. Moreover, as the camera angle changes, the facets will show up in different places and in different amounts of curvature.

The Corner detect control can be used to differentiate between very small features that normally look like curves, and relatively large angular changes that look like corners. Here are a few scenarios in which it can be used.

The picture below shows a cylinder where you might want extra corner points. However, this is such a small detail that the cylinder might look to Lasershow Converter MAX as if it is just a small curved object rather than an object with corners on it. You can indicate that you want corners to be detected here by setting the Corner detect to a higher value such as 90 or 100.

If you look closely at the picture below, you can see that the curved part of the mount is actually made up of line segments at angles to each other. If you have Corner points 155-165° set to a value of 1 or higher, Lasershow Converter MAX will detect this as a corner instead of a curve. Ordinarily you could fix this by simply setting Corner points 155-165° to 0.

But what if there were instances where you wanted extra corner points at angles between 155 and 165 degrees? In this case, you can tell Lasershow Converter MAX that you still want corner points at these angles, but reduce the corner detection sensitivity by setting Corner detect to a lower value such as 10.

The Corner detect default value of 50 percent works well for most objects. However, if you see an object that has small features where you want corners but Lasershow Converter MAX is not detecting corners, you can increase this value. Likewise if you see a large curved object on which Lasershow Converter MAX is detecting corners but you would rather see smooth curves, the Corner detect value can be decreased.

1)
For any number value, you can return to the Lasershow Converter MAX default value by right-clicking on the up/down arrow:

For non-numeric values, such as option buttons, check boxes, and drop-down lists, you cannot automatically return to the Lasershow Converter MAX default values. However, the pictures in this help file usually depict the default values, so you can reference the appropriate picture and manually set the default value.
This website uses cookies. By using the website, you agree with storing cookies on your computer. Also you acknowledge that you have read and understand our Privacy Policy. If you do not agree leave the website.More information about cookies
tools/lcmax/tips_point_spacing_for_objects.txt · Last modified: 2021/05/03 12:18 by Bob Varkevisser